It was during one of the first classes of the year that their teacher threw down a challenge that was slightly different and vastly more ambitious than many — perhaps most — high school assignments. Hamilton District Christian High School students were to asked to conceive, plan and build a project that could be a legacy for the school and the community.

No problem, thought the Grade 11 Venture students as they started throwing out ideas. What about a walking trail around campus? Nah, kinda boring, they quickly decided. An outdoor classroom? Nope. A gift shop? Pass. A hammock area? Funky, but a little too out there.

Then Sam Cooper suggested a beach volleyball court. Perfect, they agreed. It’d be useful and besides, how hard could it possibly be?

I don’t think anyone knew exactly what it would take.” ~ Sam Cooper 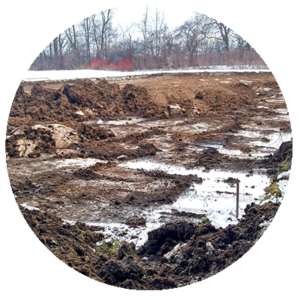 The four courts, which opened last month and are now being used by students and community groups at the Glancaster Road campus, are spectacular. Way beyond what any class project should be. But getting there was challenging.

Volleyball, as you may have heard, is growing in this area. McMaster’s men’s team has won six-straight provincial titles and beat some of the NCAA’s best, has helped draw attention to the sport. Mac’s strong women’s team, as well as successful squads from Mohawk and Redeemer, have also done plenty of heavy lifting to pump the game’s tires around here. Hometown beach volleyball Olympian, Waterdown’s Heather Bansley, has put an exclamation point on things.

That’s led to a demand for indoor courts as well as outdoor courts in the summer. Trouble is, the only outdoor beach courts in town are at Confederation Park, which is a long way from much of the city. Cooper knew this since he’s a rising volleyball star who’s caught the eye of many top universities, including the Marauders. So he understood the need — and he’s not alone.

“There’s a big demand right now,” says Mac head coach Dave Preston, who says many of his players who play recreationally in the summer have to go to Toronto to find court time. “The popularity (of beach volleyball) is huge.”

The initial idea of one court quickly became four. After the 11 students in the class presented their revised plan to the school’s board and got the thumbs up, they got to work. Only to discover they’d opened a massive can of creative and bureaucratic worms.

This was going to cost quite a bit, so they had to go to the community and feel out the interest among volleyball clubs and lock down rentals. As a result, the Ancaster Lions Volleyball Club, Mountain Athletic Club and Mountain Volleyball Club joined forces to form the new Hamilton Beach Volleyball Club.

“It will pay for itself in rentals in 10 years,” says student Matthew VanVeen. “Then it will start generating revenue.”

That done, they had to choose a location on campus. They settled on a spot out back that could be positioned with the courts facing north-south, so players wouldn’t be blinded by the sun during evening use.

Then students had to figure out what materials to use, pricing it out and finding companies to help with the actual construction and permits.

Oh, the permits. Environmental permits. Disabled access permits. Construction permits. At one point, Cooper and classmate Sawyer Berkelaar had to meet with city hall officials to make sure everything was OK, which was a daunting exercise for a couple high school kids.

By May, the digging started. Then the construction company came to put in the net posts and the fences.

Day after day, everybody in the class would watch the progress; their work was actually turning into something.

That was a moment of amazing pride.” ~ Matthew VanVeen

Finally, six trucks of sand rolled up. On May 16, they had their first users. 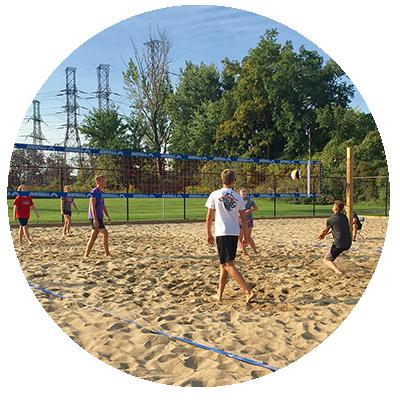 The exceptionally-done courts will get a ton of use this summer. Teams will be using them, camps will be running on them and there are public open-court times on Friday nights from 6 to 9 p.m. Next year, the school will begin incorporating beach volleyball into the phys-ed curriculum.

This project now sits alongside the school’s disc golf course that the Venture program — a class VanVeen describes as “civics and careers on steroids” — built a couple years ago. It is doing exactly the job it was supposed to do, namely filling a need for both students and the broader community.

There are rough plans to turn a shed adjacent to the courts into dressing rooms, but that’s for later. Maybe a future class? The students had already done so much this year.

As for the students who made it all happen, they haven’t received their grades for the course yet. They’ll be coming when report cards arrive in a few days. But they all agree on what they should get.

Reprinted with permission by Scott Radley, The Hamilton Spectator